10 Real Reasons Why Sugar Crush Is Bad For Your Health

Most people blame bad cholesterol for various diseases, but is it true that too much-added sugars in your diet can also cause health issues? Yes, added sugar affects you from head-to-toe. Despite various attempts on behalf of the sugar industry to present sugar as a harmless product, research has repeatedly shown that sugar – when consumed in large quantities – is bad for health. The challenging part is this: From baked goods to sweetened dairy, all processed foods contain added sugar and most people prefer processed meals over healthy food. All this results in an average consumer taking ten percent of his caloric intake from added sugar.

Reasons Why Sugar Is Bad For Your Health

Added sugar consumption is responsible for cardiovascular disease, fatty liver, leaky gut, type 2 diabetes, and even some forms of cancer. Dietary guidelines recommend to limiting calorie intake from added sugar to below ten percent per day. Here are the reasons, detailed with evidence, as to why sugar is bad for your health. 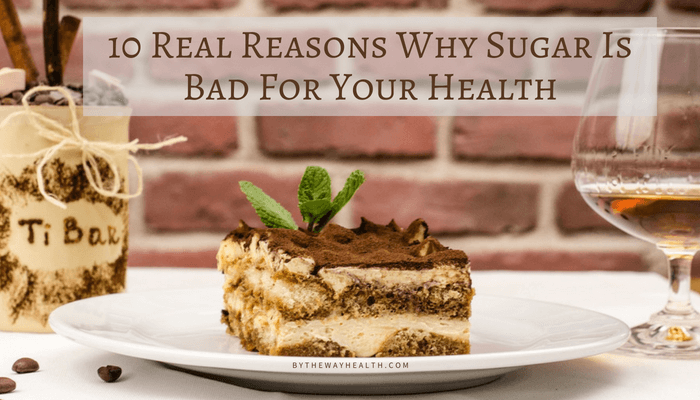 1- Sugar can cause tooth decay.

When the Greek philosopher, Aristotle, observed that sugary foods like soft fig cause cavities, no one gave an ear. Today, we all know that sugar paves way for cavities. Nevertheless, sugar does not directly cause caries (a dental term for tooth decay). It is the sequence of events taking place after sugar consumption that are to be blamed. Here’s what happens.

There live bacteria – many varieties – in your mouth. Some of these bacteria produce acid when they digest sugar. Since your oral cavity is not made for acidic pH, important minerals from your tooth leach out due to acidic effect. This we call as demineralization. Although our bodies respond to naturally restore this mineral content in teeth, repeated intake of sugar and acid production can take precedence over the natural process. Ultimately, a hole develops in the tooth that may lead to sensitivity and sharp, shooting pain.

No one is expecting you to never lay your hands on that sugary snack or a sweetened beverage. Just make sure that you don’t do this frequently. Moreover, limit your intake of sticky candies, and rise after you have consumed any such product.

Studies have associated the refined-carbs-rich diet like sugary drinks and foods to a higher risk of having acne. Processed sweets have a high glycemic index, which raises the blood sugar in your body faster than other foods having the low glycemic index.

A study has shown that sugary foods rapidly raise the blood sugar and insulin levels, which leads to a rise in androgen secretion, inflammation, and oil production. All of these play an active role in developing acne.

Another study that observed 2,300 teens showed that participants who frequently consumed added sugars faced 30 percent higher risk of developing acne compared to those who had limited sugar intake.

Not only that added sugar consumption increases the risk of developing acne, but it also results in skin aging. Sugar, once it reaches the blood, sticks to the proteins in your blood, and produces harmful molecules, Advanced Glycation End products (AGEs). The AGEs, as the acronym suggests, age your skin.

Related article: 14 Things You Can Do To Treat Your Acne

Obesity has become a growing concern worldwide. The main culprit regarding this problem is added sugar, especially that coming from the sugary beverages.

Sugary drinks like soda, sweet teas, and juices contain high amounts of fructose, which, as mentioned earlier, does no good to the human body. Not only that fructose in your body causes fatty liver, but it also is unable to satiate the consumer. It increases hunger and causes you to desire more food.

Moreover, consuming excessive fructose makes you resistant to leptin, which is a hunger-regulating hormone that directs your body to stop eating. In this way, you tend to consume more liquid calories, which cause weight gain.

A study, published in 2013, observed two groups one of which drank a glucose-sweetened drink while the other consumed the fructose-sweetened drink. It found that the glucose-drinking group experienced reduced blood flow in hypothalamus and satiety, whereas the fructose-drinking group experienced increased blood flow in the aforementioned brain area and felt hungry.

Another study has shown that fructose does not reduce the ghrelin levels as the glucose do. Ghrelin is a hunger hormone. If you have higher levels of ghrelin, you feel more hunger.

4- Sugar increases the risk of diabetes. 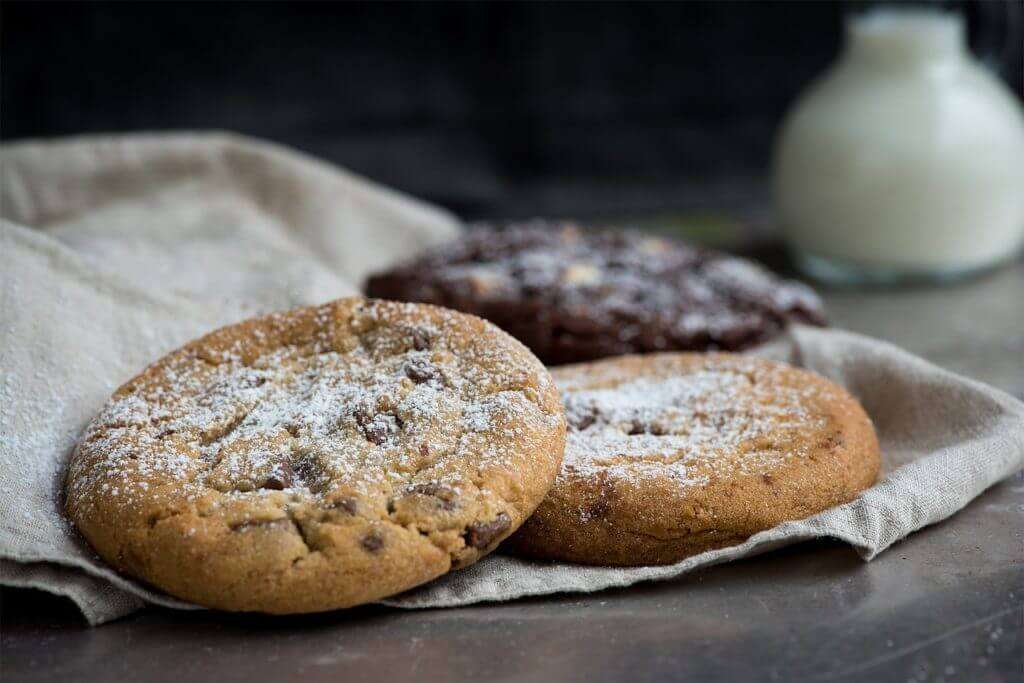 Insulin resistance even leads to a rise in blood insulin levels. As the pancreas responds to this resistance by secreting more insulin as an attempt to remove the blood glucose as increased glucose in the bloodstream is toxic.

The situation becomes more complicated because of elevated insulin levels as insulin also directs the fat cells to take fat from the bloodstream and store it in addition to the fact they are already carrying.

A population study involving more than 175 countries has shown that the risk of diabetes rises by 1.1% with consumption of every 150 calories of sugar per day, which is equal to one soda can.

Other studies also show that people who consume sugary drinks including fruit juice have more risk of developing diabetes.

Although skin aging is a natural process and wrinkling occurs regardless of one’s health, it can worsen with poor food choices. If you are not careful with your diet, you may experience wrinkling, which is a telltale sign that your skin has started aging.

As mentioned before, the compounds called AGEs are produced by the reaction between proteins and sugar in your body. Evidence has it that they play a major role in the skin aging process.

What happens when you take a diet filled with refined carbs and sugar? The protein in your body forms molecules with the sugar that result in premature aging of your skin. AGEs harm elastin and collagen, the proteins responsible for keeping your skin stretched, and retaining its youthful appearance.

When these proteins are damaged, the skin starts sagging and loses its firmness. A study in women found that participants consuming more carbs, including added sugars, showed more wrinkling than those who were on a lower-carb, high-protein diet.
The researchers linked the lower carbs-intake to the better skin-aging appearance.

Telomeres are the molecular structures that store a part or all of your genetic information. They exist at the end of the chromosomes. Apart from storing information, these protecting caps prevent chromosomes from fusing together or deterioration. When you grow old, these structures shorten, which results in cell aging and malfunctioning.

It is pertinent to mention here that the shortening of telomeres is the normal phase of aging. However, unhealthy food choices can accelerate the process.

According to research, high consumption of sugar can accelerate the telomere shortening process ultimately resulting in increased cellular aging.

It means that eating too much sugar puts you at the risk of dying from heart disease.
Moreover, high sugar consumption, especially from sugary drinks, lead to atherosclerosis – a disease marked by fatty, artery-clogging deposits.

Therefore, only one sugar-sweetened drink already puts you over the prescribed daily limit for added sugar.

8- Sugar increases the risk of cancer.

Excessive consumption of sugar can increase your risk of developing certain forms of cancers. According to a study, obesity increases the risk of cancer. It is a well-established fact now that a high-sugar diet leads to obesity.

Another study in more than 430,000 individuals has associated the consumption of added sugar with an increased risk of esophageal cancer, small intestine cancer, and pleural cancer.

As per this study, added sugars raise the risk of esophageal cancer whereas added fructose increases the risk of cancer in the small intestine. One study maintains that women who ate cookies and sweet buns more than three times a week had 1.42
times more risk to develop endometrial cancer than those who ate these foods less than 0.5 times a week.

There is still a lot of scope in research on the link between cancer and sugar intake. However, the studies conducted already point towards this complex relationship.

9- Sugar increases the risk of depression.

It is a renowned fact that a healthy diet lightens up your mood. Just as a healthy diet has a positive effect on your mood, a diet loaded with added sugar including the processed foods can increase your risk to develop depression.

According to a study, eating processed foods that include high-sugar products like sugary drinks and cakes put you at a higher risk of depression.

Another cohort study has concluded that neurotransmitter dysregulation, inflammation, and blood sugar swings all point out towards the detrimental effects of sugar on mental health.

A study in 8,000 individuals for 22 years observed that men who ate 67 grams of sugar or more every day had 23% more chance of developing depression than those who consumed less than 40 grams per day.

10- Sugar causes a sudden boost in energy followed by a crash.

Sugar-high diet rapidly raises the blood sugar and insulin levels. The sudden rise in these levels increases the energy levels as well. However, these elevated energy levels last for a short time.

Products containing empty calories, i.e., packed with sugar, but lack of protein, fat, or fiber cause a sudden boost in energy, which follows by an immense drop in blood sugar, also known as the crash.

Persistent blood sugar swings may result in fluctuations in energy levels. This is an energy-draining cycle that disrupts your day-to-day business. In order to avoid this, you should opt for carb sources that are rich in fiber and low in added sugar.

In this age where one is occupied 24/7, consumption of processed foods, quick snacks, and sweetened beverages has become a common practice. Replacement of natural foods with these handy products has taken a toll on human health. The unhealthy lifestyle choices of the modern era have rendered us vulnerable to a lot of complex health conditions. Added sugar consumption poses too many adverse effects on human beings.
Excessive consumption of sugary foods and drinks may lead to blood sugar issues, weight gain, and a high risk of heart disease. 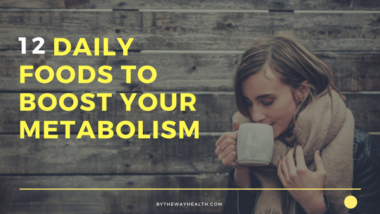 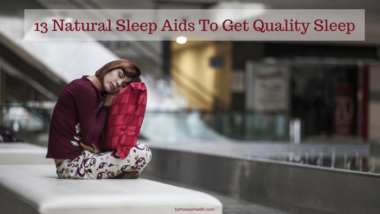